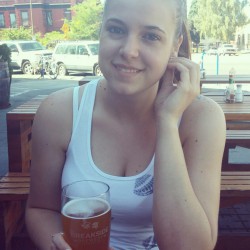 The beginning of this book was tedious and unrewarding for me. I really had to break a sweat to keep reading because I really didn't connect with what was going on in the book. I felt that the author sort of rushed the entire opening sequences to bring Mare Barrow's story to it's point which is her living in the palace as a Red and being betrothed to Prince Maven. However, I was so excited to read this when it came out, asked for it for my birthday back in February, and then let public opinion dictate how I'd feel. I saw high and low reviews for this so it collected dust on my shelf until I could decide what to do with it. I am very glad I eventually read it because I enjoyed it despite my reservations.

This book has been criticized for being closely related to Red Rising, The Selection (I honestly don't see this one), and The Hunger Games. Red Rising, I'll get back to, but in an oversaturated genre of books being released by the truck loads per year, it's hard to have a purely 100% original idea. Stephen King says in his book On Writing: A Memoir of the Craft that to be a good author you have to read...a lot. I envision Victoria Aveyard sitting down and reading a book and taking notes on her thoughts as she came to certain parts. Is this like other books I've read? Yes. But I've also said that about some of my favorites. The Wheel of Time Series is just a more in depth Lord of the Rings and Song of Ice and Fire is Medieval Britannica with Dragons. My point being....readers need to give her a break, because while there are similarities I can pick and chose from, if you look at the content and the meat of the story there is something there.

Now...I am a Red Rising apologist. It is one of my favorites and Pierce Brown is like a role model for me. He really doesn't need me to defend him, he lets his writing speak for himself...as he should. However, I will simply state that while there are some (very few) similarities between this book and his, there is one that Pierce Brown does much, much better. He builds history and most importantly he builds discrimination against his characters. The real let down of this novel was the lack of distain and blatant tension against Silvers and Reds in this book. I understand the basic premise of why...Silvers are powerful in more ways than one. But what I really wanted to escalate this novel was the feeling behind it. As readers we were told this division existed and we were just suppose to go along with it, but beyond that there really wasn't much there. Pierce Brown does this perfectly in both his novels so I would highly recommend that readers explore those books in addition to this one.

I think Victoria Aveyard does have a talent for writing that I can envision will grow with her publishing career. There was a feeling of "unpolishedness" that resonated through the novel where it was choppy, hurried, and basic; but overall the elements of a storyteller were there. I had a few problems with the fact that the love "triangle" (more like a square honestly) involved two brothers. That's just a new form of low to be honest. And to pile on the fact that Mare Barrow was so loved by every boy she came across just didn't sit well with me. Speaking of Mare, she wasn't the best Main Character I've ever came in contact with; she has a certain selfishness and ignorance that makes her genuinely unlikable.

In my mind I tried to drown out the noise, certain aspects of characterization and plot and just enjoy the book, because I wanted to read something light and fun and enjoy my afternoon of sunshine. Overall that is what this book is, fun and easy. There are similarities to other books (my definitive choice is it starkly reminds me of The Grisha trilogy) and there are weaknesses to it's plot and world building that seem to have been done in better books. Again, it was just a book to enjoy and I'm glad I did.

No More Shades of Grey....puhlease...

I was a child when the first three books came out; a college student who was recommended these books. I went through a breakup and needed love to raise my spirits. At first I thought they were ok, not great, but both my mom and sister GUSHED over them which I firmly believe influenced my thought process on these. I actually decided to read them again years & years later because I was curious...how would I change.

When you live through an abusive relationship you see things differently. Having experienced emotional and sexual abuse at the hands of someone I loved wasn't cute or romantic. Having someone tell me I couldn't see my friends anymore because he didn't like them and I was with him now so his friends were my friends wasn't a rom-com. Having your self-esteem and personality chipped away because your partner is a jealous and emotionally withdrawn monster isn't my idea of a happily ever after.

What saddens me most is that it took me living through things Christian Grey did to Ana in my own real life to understand just how truly awful these books are. I would highly recommend people stop buying in to these books (and now movies) as they perpetuate a line of thinking that is very unhealthy for women. What is represented in these books is NOT OK and never will be.